A couple weeks ago, in our area, a series of snow storms came through. Our house received about 8" in 48 hours and our ski resort, Snowbasin, received about 11" total from the storms. I'm sure Friday would have been an amazing powder day to ski. If you love skiing as much as my husband you would get it; but I don't have that level of love for the slopes (yet?) so I was fine staying home with the warmth of my coffee and listening to the kids playing downstairs.

However, it was suggested to me that since the girl had a day off of school, I should take the kids skiing Friday. Well, I have never taken both kids skiing by myself so I was hesitant. Now as I type this, it sounds ridiculous to me. I mean, I birthed these children and have raised them up this far. They are my job and I take them everywhere with me. I have successfully managed the zoo, IKEA (without the smaland), many grocery trips, swimming pools, hiking, and other outings with just me and them. So skiing with the two should be something I am capable of too, right? But here's the deal, all the other activities I do with the kids are mostly me watching them do the activity or them helping me. Rarely do all three of us participate in the same activity at the same time - enter skiing, biking, "swimming" which I usually wade around and help them, and hiking too I guess, though it's just walking on a trail. I've only been back to skiing for three seasons now so I'm not what you would call an expert. So in my mind, the three of us going skiing is like three beginners skiing together. No guidance, no experts, no help. Last season, I also tore my ACL on our last run of the year so that is mentally messing me up too; though physically I am capable of skiing again.

Imagine the scene: we start preparing at 1:30pm and leave the house at 1:55 (a record as far as I'm concerned even with most of their ski gear already loaded up in our "ski bin.") I thought that later in the day would be less busy and we could pull right in and park in lot A or B. Nope, we parked in lot E - Next time I'll park in the lower lot because it's the last stop of the shuttle before going back to the lodge. I got out of the car and put on my boots and helmet then helped the kids put on their helmets and gloves. I handed each kid their poles and skis - which they cradle in their arms sort of like a bundle of sticks. I grabbed my skis and poles and off we went. I didn't want to stand around waiting for the shuttle to stop by so I figured we could start walking and hop on when it came by. Well we were almost to lot C when the boy dropped all his gear right in the middle of the road. So there I am with a whiny kid in the middle of the parking lot trying to pick up his skis without dropping my own. Thankfully no one was around to see this mess but also that means no one was around to lend a hand either. We kept walking and by the time the shuttle came we were almost to lot A so I waved him on and we kept walking. After much whining from both kids and snapping from me, we arrived at Little Cat lift around 2:30 and proceeded to put on our skis.

The rest of the time was okay, we only skied little cat because it was snowing a little at the base which sometimes that means more snow and less visibility up top. I tried to be kind and we did have some fun. Overall a good time with a lot of work for five quick runs. I will try to take them again sometime but it was definitely a lesson for me. Next time we will try to go earlier and have more fun snacks and incentives for good attitudes all around. 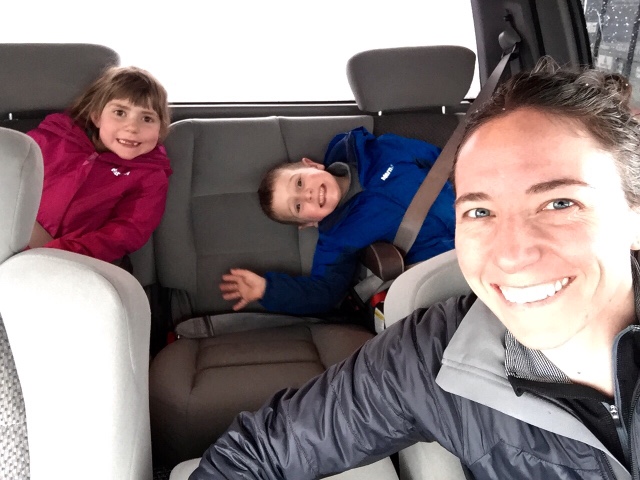 This picture represents the happy faces of a mom and her two kids who survived their first ski afternoon together, without dad's help. I guess you could call it a successful trip but that depends on your definition of success. Websters defines success as:

So the desired outcome I wanted was to take the kids skiing and A: be able to ski with both of them and make it down the mountain in one piece, B: still be friends afterward. So I think it was a success.

And to all you parents out there trying to do fun things with your kids even though it is difficult and may not seem worth it at the time; it is worth it and the memories are being made. If skiing isn't your thing, get out and do something with your kids and hopefully, like my kids, they'll remember more of the good moments and less of the tired and stressed moments.

Now when I start to "go to that place in my head" when I'm out with the kids, I try to remind myself of Colossians 3:17 "Whatever you do, in word or deed, do everything in the name of the Lord Jesus, giving thanks to God the Father through him."

This ski trip was not really an example of living for Christ in word or deed but hopefully, by God's grace and mercy, the next time is.

written by Amy Gompert on Wednesday, January 27, 2016 No comments:

Today, at lunch, he turned to me and said, "Mom, I think we should get some rabbits. The giant kind. And, I would like a whole herd of giant rabbits too."

I simply smiled at him and laughed too. See, Pete gets a magazine called "Farm Show" and this month's issue had a picture of a man with his Flemish Giant Rabbit - which is huge! So obviously that's the only rabbit that the boy wants. We often take trips to our local IFA store sometimes just so the kids can see the bunnies and chicks. The kids have wanted a bunny for a pet but then we got a kitten so I told them they'd have to wait a few years. But I think if we ever do get a rabbit, it will either be a mini-size (like I want) or a giant of a beast that the kids want. Maybe next year, instead of pigs, we can raise a herd of giant rabbits!

written by Amy Gompert on Thursday, January 07, 2016 No comments:

This year! I am so excited for this year, 2016. I have always loved fresh starts: first day of the year, month, job, school. The first day is energizing and life giving. It has a way of helping you say goodbye to the past and move on in hope. I am hopeful that twenty sixteen will be the year God has intended for me. I am looking forward to opportunities to take and not miss, to our family growing stronger together, and to the fact that our year, as of now, is uneventful and unplanned but I'm sure it will fill up quickly and I'm going to try to help those things be intentional and to glorify God through it all.

Review of last year: It was a good year, a "normal" ordinary year, yet I grew in my relationships with nearly everyone. I am thankful that God is showing me my sinful nature but with reminders that I am not controlled by sin but belong to God. I did indeed memorize Colossians 3:12-17 and also 3:18-4:1 though it's a bit rusty now but I am glad to have accomplished something I set out to do. I am still working on memorizing Romans chapter 8 and will continue that goal until it is completed - hopefully in 2016 but some how it will be done because it has brought me such joy in knowing that truths contained in that chapter and knowing them in my mind and heart.

Along with continuing to memorize Romans eight, this year, I bought a book to help me in my Bible times and prayer. It's called The Songs of Jesus a yearly devotional in the Psalms written by Tim Keller and his wife Kathy. I am trying to use it to guide my prayer life in actually talking with God and understanding better how he cares for us. I know I will miss a day or two or fifteen but I will not guilt myself as if I've somehow failed myself or God but I will simply carry on and know that God has something for me to learn in His Word so I should seek Him there.

I have other goals, in other areas of my life, because it helps me to reset and make plans, but I'll not list them here, just yet. But one reminder I will be using is a printable from Ann Voskamp that I hope will help me focus my intentions and look to God for strength. You can find it here in her blog on looking forward this year and having purpose in resolutions.

I am ready for 2016 and very excited. I know that we will have hardships of some type or another but I am trusting God that whatever he sends our way will be for His glory and I pray he will sustain us through it and we will react in a way that points others around us to the love of Christ and his grace.

I love music and I am often encouraged by different songs throughout the year and this year I will listen to the song "This Year" by JJ Heller probably a million times! It sums up what I hope for myself this year. I pray you will listen to it too and be encouraged; plus she's just adorable and I love their music so go buy one of her albums, my favorites so far are "I Dream of You" and "Painted Red"

Happy New Year, may you experience all of life in the light of God's glory and grace.
written by Amy Gompert on Friday, January 01, 2016 No comments:
Newer Posts Older Posts Home
Subscribe to: Posts (Atom)