i have been trying to blog every week lately, but i am running on empty in the blog department. i do not have a good post for you yet. i already blogged about school and that has been consuming my life as of late so nothing new there. also i have realized that the more i change my status on facebook, the less i think of things to blog. i think i will start saving my status' and explain them in more detail on the blog. if there is something you want me to blog about, a topic or idea, let me know. until i blog again, thanks for reading.
written by AMY on Thursday, August 28, 2008 2 comments:

okay, the first day of school is complete and i not only survived but i feel that it went very well overall. because this is now my third year (can you believe it) i think i have a better handle on the first days of school. i also think this year could possibly be the hardest yet and here's why:

i took two training/classes this summer which is awesome, but also shows me where i have weaknesses in my teaching practices and that is difficult for me to let pass by. (i can't do everything all at once)

i now have students that i have taught for three years now, and they think they have me all figured out so it is a challenge to continue to make things better and slightly unpredictable for them. (because i am completely predictable)

i am still a "newbie" but i feel like more is expected from me now, which is good but hard to live up to already.


more updates to come (especially those of a non-teaching nature) thank you for being my friends and reading about my life. hopefully we can talk face to face soon.

i have many ideas in my head about the next school year, what type of teacher i will be, what i desire for my students and from my students, and the relationships i will form with my fellow teachers. all of those depend somewhat on me and partly on others. i was frustrated the other day with all my plans because i did not know how i would fit them in. i decided to take a break and read my Bible, which i am getting better at doing on a more regular basis. i am still reading through 2 timothy and i often forget where i was so i read the same passage more than once (can't hurt right.) it was in chapter 2 and 3 that i found my "motto" or reminder for the next year.

2 TIMOTHY 2.22-3.17 So flee youthful passions and pursue righteousness, faith, love, and peace, along with those who call on the Lord from a pure heart. Have nothing to do with foolish, ignorant controversies; you know that they breed quarrels. And the Lord’s servant must not be quarrelsome but kind to everyone, able to teach, patiently enduring evil, correcting his opponents with gentleness. God may perhaps grant them repentance leading to a knowledge of the truth, and they may come to their senses and escape from the snare of the devil, after being captured by him to do his will. But understand this, that in the last days there will come times of difficulty. For people will be lovers of self, lovers of money, proud, arrogant, abusive, disobedient to their parents, ungrateful, unholy,  heartless, unappeasable, slanderous, without self-control, brutal, not loving good, treacherous, reckless, swollen with conceit, lovers of pleasure rather than lovers of God, having the appearance of godliness, but denying its power.

Avoid such people. For among them are those who creep into households and capture weak women, burdened with sins and led astray by various passions, always learning and never able to arrive at a knowledge of the truth. Just as Jannes and Jambres opposed Moses, so these men also oppose the truth, men corrupted in mind and disqualified regarding the faith. But they will not get very far, for their folly will be plain to all, as was that of those two men. You, however, have followed my teaching, my conduct, my aim in life, my faith, my patience, my love, my steadfastness, my persecutions and sufferings that happened to me at Antioch, at Iconium, and at Lystra—which persecutions I endured; yet from them all the Lord rescued me. Indeed, all who desire to live a godly life in Christ Jesus will be persecuted, while evil people and impostors will go on from bad to worse, deceiving and being deceived. But as for you, continue in what you have learned and have firmly believed, knowing from whom you learned it and how from childhood you have been acquainted with the sacred writings, which are able to make you wise for salvation through faith in Christ Jesus.  All Scripture is breathed out by God and profitable for teaching, for reproof, for correction, and for training in righteousness, that the man of God may be competent, equipped for every good work.

the first half has the verses i will focus on. i want to be a person of righteousness, faith, love, and peace; not quarrelsome, but kind, able to teach and patient to endure evil. i pray for wisdom in handling quarrels and knowing when to step away from ignorant controversies. hopefully ending with the Lord granting them repentance that leads to a knowledge of truth.

please check this passage out and tell me what you think. what are your thoughts? i want to know. this was written to timothy and i feel right now i am in a position that could be similar (obviously no one will put me in prison right now for teaching but i do hope i can be bold and include the gospel in my teaching all the time.) please pray for me as the school year begins and tell me what i could pray about for you (really, tell me and i will try to pray for you).

today is the official day of celebration of jamaican independence from the uk. i thought it would be appropriate to blog about our trip today as sort of a shout out to the jamaican people. (okay, i wasn't going to blog today but i check "this day in history" quite frequently and jamaica was on today because of their independence.) this post will by no means be everything i want to say or learned about jamaica, but it will be enough for you to get the idea.
our trip was good, some of it great, some of it hard. i did not get too sick or too hot (too often anyway.) i enjoyed meeting the other people from new hampshire and california. i also enjoyed the place we stayed (it exceeded my expectations.)
what we did:
played with kids at an orphanage
some people painted (3x)
some constructed a fence and some steps (go tom!)
we did two days of vbs twice each day
played music for church and twice as a street ministry
held a medical clinic almost everyday we were there (blood pressure, blood sugar, and vision)
pastor murray conducted a 3 day conference for pastors to come and learn more about ministering to their congregations.
what i learned:
jamaicans are very intense whether extra friendly or very cross - a lady at customs told me to, "(h)old de phone and stand over there" it was interesting only because sarah and i follow directions very literally - i'll tell you the rest later
i was more flexible than i thought i would be - turns out, because of rain or darkness, we only did street music twice instead of five times. which i was fine with even though we had practiced quite a bit and brought a bunch of musical equipment down.
i am not good at reading my Bible and praying no matter what country i am in - although i did pretty good in jamaica with doing it every day because that was one of my goals. how sincere or private it was is another story; there was nowhere to hide in that house.
i saw more churches there than anywhere else - they were literally on every street.
Protestant 62.5% (Seventh-Day Adventist 10.8%, Pentecostal 9.5%, Other Church of God 8.3%, Baptist 7.2%, New Testament Church of God 6.3%, Church of God in Jamaica 4.8%, Church of God of Prophecy 4.3%, Anglican 3.6%, other Christian 7.7%), Roman Catholic 2.6%, other or unspecified 14.2%, none 20.9%, (2001 census) - cia factbook
my lmh official dictionary of jamaican history said that jamaica has more churches per square mile than anywhere else in the world (also in the guinness book of world records)
i also read that someone wants to translate the Bible into their other language - patois!
i enjoy missions trips, but they always make me feel bad for leaving and wishing that a full time missionary would go instead of us (42,000 is a lot of money)
i am not a risk taker person nor do i like to try new things like snorkeling - i did try new foods most of which i did not like (gnips yuck)
that is enough for now - i will post more later. here are a few pictures from our trip:
captions to pictures - because the layout isn't working they are in order sorry it is confusing-
1 house we stayed in, i got to shower almost every day 2 transportation while we were there 3 a couple of the girls i talked with the little puppet doll is named mary. the girl was so excited when i gave it to her 4 sunset at the beach, beautiful water too 5 strange bug we saw the first day. it is about 2 inches long "welcome to jamaica!" 6 jamaica is green everywhere 7 a place we ministered at called gravel ground - i think we were all affected by this place and the people 8 the baptist church we did church, vbs, construction, and medical 9 the kids like to take our picture with our camera (sarah eventually got hers back) it is a great picture 10 medical at open Bible the other church we did vbs at. the whole team did such a good job. 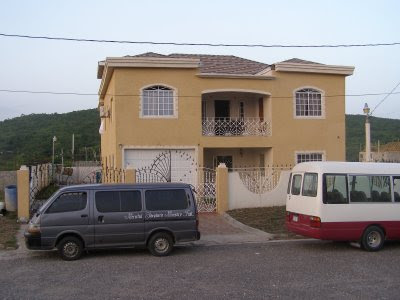 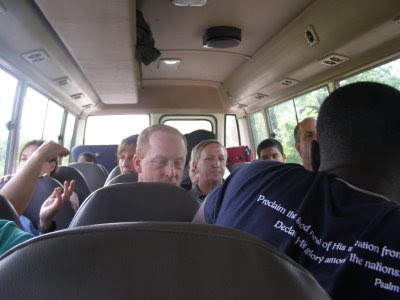 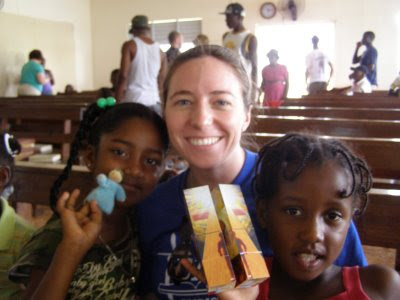 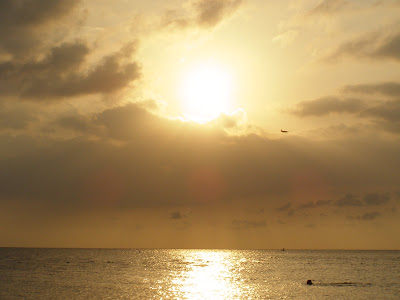 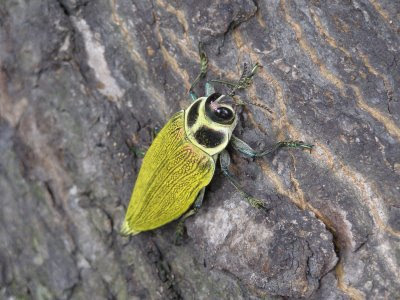 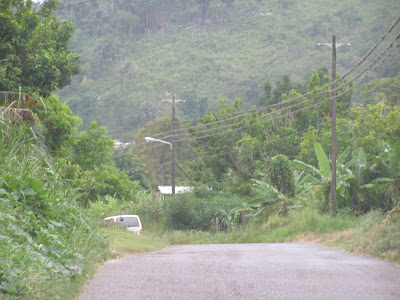 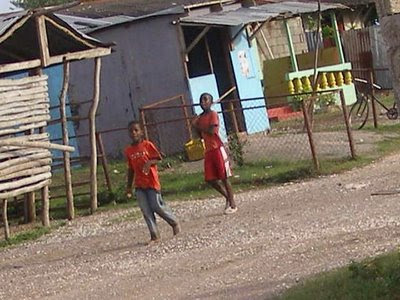 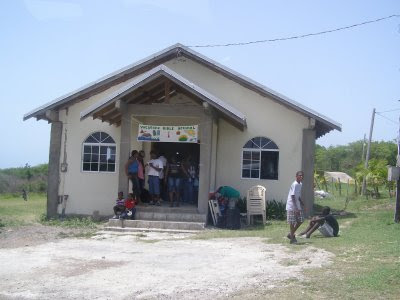 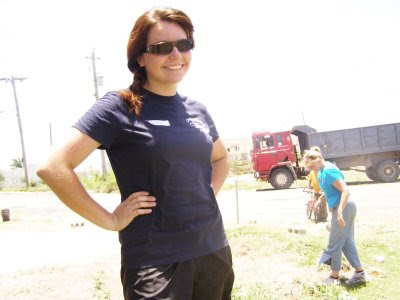 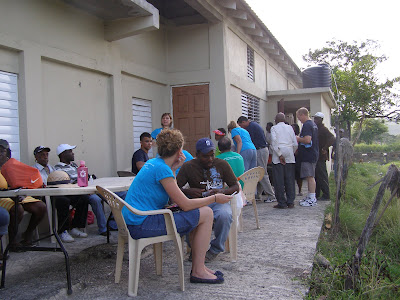 written by AMY on Wednesday, August 06, 2008 No comments:
now to him who is able to keep you from stumbling and to present you blameless before the presence of his glory with great joy, to the only God, our Savior, through Jesus Christ our Lord, be glory, majesty, dominion, and authority, before all time and now and forever. amen. jude 24 - 25
written by AMY on Friday, August 01, 2008 1 comment:
Newer Posts Older Posts Home
Subscribe to: Posts (Atom)